Why This Year’s Giving Tuesday is More Critical than Ever

Giving Tuesday (alternatively known as the National Day of Giving) got its start in 2012 as a largely grassroots fundraising effort. With a huge online footprint — and coinciding with the rise of social media platforms — Giving Tuesday (always the Tuesday after Thanksgiving) has grown from $28M in U.S. online and offline donations in 2013 nearly one hundred-fold to an estimated $2.7B in 2021. Giving Tuesday has been a prime opportunity to leverage online-social media resources to raise funds and attract supporters, all while celebrating the community of philanthropic giving.

Some nonprofit analysts have predicted, based on national giving trends, adjusted linear regression and ‘Giving Tuesday’ Google searches, that the 2022 edition of Giving Tuesday will surpass $3.2B — an +18% increase over 2021.  This forecast would be welcome news to the nonprofit world. However, organizations nationwide aren’t counting their chickens just yet, as for many 2022 has been a struggle, and their dependence on a strong Giving Tuesday is more important than ever. 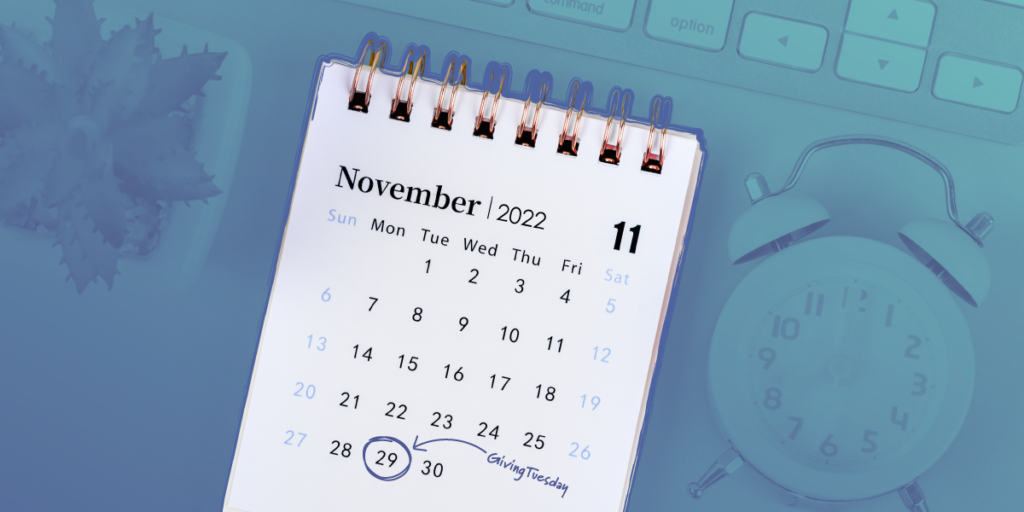 WHY NONPROFITS HAVE STRUGGLED IN 2022

According to Giving USA, which is researched and written by Indiana University-Purdue University Indianapolis’ Lilly Family School of Philanthropy, total U.S. charitable giving reached $485.9B in 2021 — an increase of +4% over 2020. However, while giving increased in hard dollars, after inflation was taken into account giving was actually down nearly -1%.

A number of factors are contributors to this result:  a tightening economy marked by nearly double-digit year-over year inflation not seen in 40 years; a consequential cost-of-living that many households are struggling to negotiate; a declining investment market; and the pitfalls of competing against a pandemic-affected 2020 that drove donations through the roof for those suffering from COVID, directly and indirectly.  These factors culminate in a challenging fundraising environment for nonprofits nationwide.

INFLATION IS AT ITS HIGHEST RATE IN 41 YEARS…

In early 2021, a worldwide increase in inflation started, the result of various catalysts: 1) fallout from the height of the COVID pandemic, 2) related fiscal stimulus afteraffects, 3) supply chain shortages and delays in everything from food and gasoline to energy, computer chips and durable goods, and 4) consequential widespread price gouging in many industries. These factors combined to drive the U.S. year-over-year inflation rate from +1% in January 2021 to +5-6% just by mid-year.  The rate has since grown even more as consumer prices were reported up +9.1% by June 2022 — the largest 12-month increase since November 1981.

…WHICH HAS TAKEN ITS TOLL ON AMERICAN HOUSEHOLDS

As the inflation rate continues to rise to its highest point in a generation, U.S. households continue to struggle in their efforts to make ends meet. According to a Gallup survey conducted just last month, the majority of the nation’s adults say that price increases are causing financial hardship for their household — with 44% facing ‘moderate’ hardship and another 12% labeling theirs ‘severe’ and affecting their ability to maintain their current standard of living. Inflation tension has even stretched to the higher-income brackets; 40% of household incomes of $90,000+ said they’re facing financial adversity in the face of inflation — up from just 29% in November 2021.

It goes without saying that as millions of adults across the country rework their household budgets to afford essential line items, there is certainly less money (if any at all) at the end to divert to discretional spending. Which in many cases is exactly were ‘philanthropic giving to charity’ resides; it’s typically one of the first line items on the chopping block when ‘tightening the belt.’

Financial experts say that while economic uncertainty may have peaked in the first half of 2022, it remains high and there’s a chance the uncertainty could grow further. The stock market is likely to continue to feel the weight of Federal Reserve policy tightening (interest rates have been raised five times this year alone, starting with a hike in March — the first since 2019), shrinking market liquidity and slowing economic growth.

The Dow Jones Industrial Average opened 2020 at 26,891, closing at 30,606 — a +7% increase. Twenty twenty-one took the average up to 36,338 — another +19%. However, the aforementioned factors have ganged up to give investors a -17% decline on their investments in 2022 YTD (through September). This is yet another brick in the wall giving potential donors trepidation of not only their current financial security, but their future outlook as well. 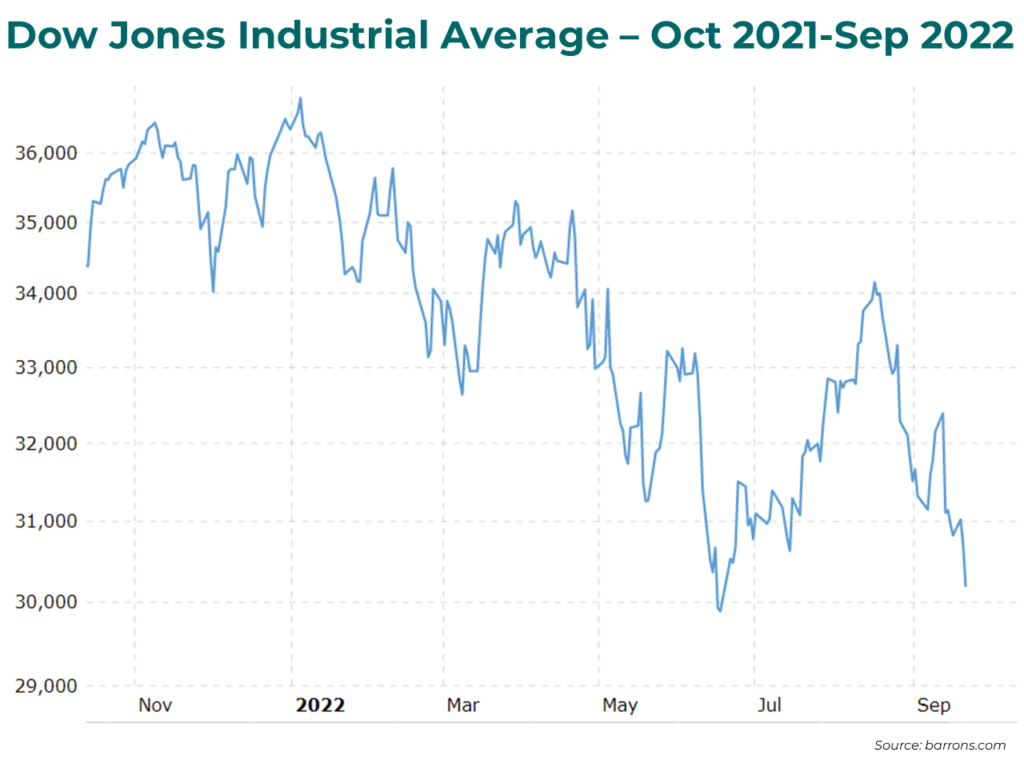 As many chronicles (including this one from the New York Times, written during the height of the COVID-19 pandemic) will attest, a large percentage of donors will give more during times of crisis and disaster than they will during normal times. When the Coronavirus essentially halted a large percentage of the workforce in early 2020, charitable supporters stepped up in a big way, giving more and giving more quickly than they typically do. Vital Health and Human Service causes (such as foodbanks, the Red Cross, and organizations that aid the homeless and suffering) saw drastic upticks in support, with the share of individuals reporting that they gave to charitable organizations increasing +4-6% between May-September 2020….with (to underscore our earlier point) 81% of respondents in May (and 87% in September) indicating they maintained or increased their giving to health and human service organizations. 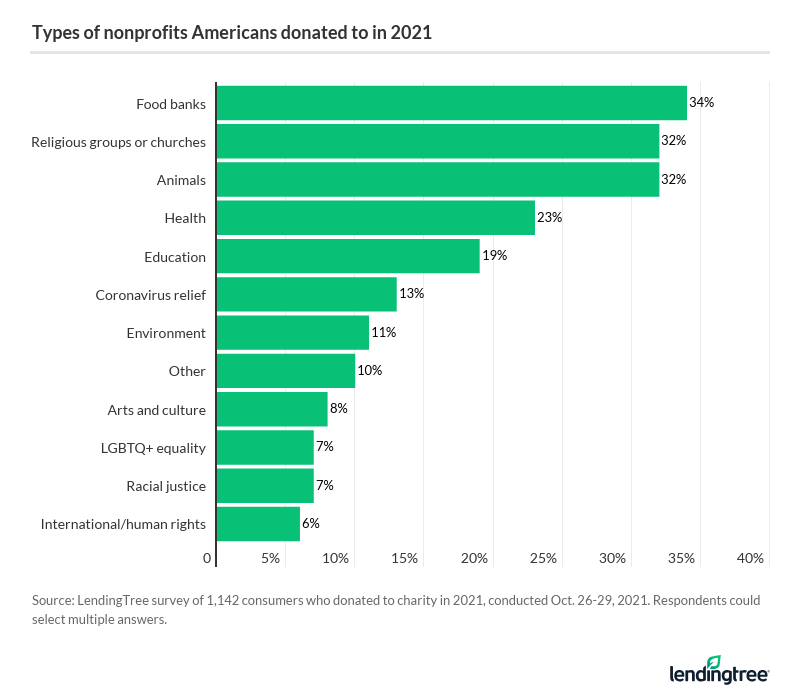 Whether it be a health pandemic such as COVID, a natural disaster like a hurricane or tropical storm, flooding or earthquake, a large percentage of the population historically respond with donations when helping people in need is imperative.  The COVID years of 2020-2021 were no exception — and prognosticating giving at those same levels in 2022 will certainly be a tough sell.

THE TREND OF ANNUAL GIVING PER CAPITA

According to Giving USA, the average charity donation for American adults in 2021 was $813, up from $737 in 2020 and significantly higher than the $574 reported in 2019.  This data would have us believe that the upward trend should continue into 2022….but remember our statement regarding heightened giving during a pandemic or disaster? For that reason, experts believe per capita giving may very well dip from 2020-2021 levels.  Furthermore, research from online lending company LendingTree showed that while more than half (55-56%) of Americans donated to charity in 2020- 2021, it was noticeably down from 2019 (pre-pandemic) levels, when 65% made contributions. Matt Schultz, LendingTree chief credit analyst, offers a takeaway given the rigorous current economic environment: “It doesn’t surprise me that folks might be more likely to save their money or pay down debt rather than donating it.”

SOOOOO….WHERE DOES GIVING TUESDAY COME IN?

We don’t know exactly when — or if — inflation will start to settle (allowing the cost-of-living to slowly start to normalize), when the investment market will take a turn for the better, or precisely where Americans’ charitable giving levels will end up by year’s end.  One of the few certainties we DO know is that November 29, 2022 — Giving Tuesday — is a day circled in red on all nonprofits’ calendars.  And know it’s circled on many donors’ calendars too.

Now more than ever,  due to the headwinds U.S. households are facing….the need of the populations you serve is just as great as it has been in years past — and likely GREATER due to these economic hardships — and that their support is critical to allow you to continue to go to bat for those who need assistance.  Without support from constituents like them, your mission may falter.  And what better time to leverage their support than on a day specifically earmarked for giving to charitable causes?

If you’d like to discuss your Giving Tuesday 2022 plan and see how our software can help you realize your goals, please reach out.

Join our newsletter to get the latest information.
DonorPoint ® 2022 |  by Mobkii
Menu